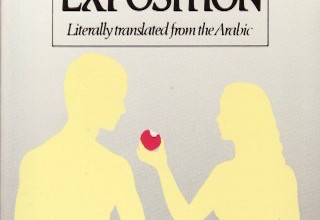 An English Bohemian – the Anonymous Translator of an Authorless Book

THE ORIGINAL Arabic version of The Book of Exposition was written in the fifteenth century. The author of the book has never been confirmed, although Egyptian religious scholar Jalal Addin al-Siyuti is widely credited for this collection of erotica. For obvious reasons, many have argued that an acclaimed religious scholar would not produce such vulgarity. No author declared these pages of promiscuity as their own, suggesting they may have taken voluntary anonymity to avoid causing a ruckus. In the modern world, the collection of short stories may be unfulfilling to its original purpose, and perhaps is better read in a historical context.

Most intriguing of all is the translator of this work who operates under the pseudonym, ‘An English Bohemian.’ As an enthusiastic orientalist, An English Bohemian provides an extensive Foreword that addresses the original work’s written style of Saj’; an Arabic rhythmic prose that is used across a range of religious and non-religious texts. He also includes thorough analyses of the role of women in Islam, and other misconceived aspects of the religion. The titillating buzz around The Book of Exposition deterred it from mainstream readership, and only 300 copies were released in France for intrigued Anglophones at the turn of the twentieth century.

Our Bohemian saw it as his duty to counter Western misconceptions about the Quran and Islam. “It is not therefore true which many authors who have opposed Islam have asserted – that the Moslems know no other happiness in Heaven but the use of pleasures which affect the senses.” The translator also includes an extensive discussion of polygamy, and why it should not be associated with Islam alone, supporting his argument with research by scholars including polemic John Milton, who suggested that many of those professing Christianity favoured multiple wives in previous centuries. Our Bohemian does not condone polygamy, but he focuses on detaching false accusations from Islam. He also criticises Western traditions that self-proclaim superiority over the Oriental equivalent, particularly marriage. Many of his observations support similar claims made by German 18th century traveller Carsten Niebuhr and Persian nobleman and traveller, Mirza Abu Taleb Khan Isfahani (1752-1806), who both acknowledged Europe’s hypocrisy on moral judgement.

The Book of Exposition is first and foremost a collection of Arabian erotica that could be received as insolent, but only if it is taken for its nominal value and ignored as a fine piece of research and translation. An English Bohemian took it in his stride to use Jalal Addin Al-Siyuti’s work as a protector of Islam and Arabian culture, urging their acceptance amongst European skeptics, and most importantly, challenging the many flaws of Western culture and religion.

It is most fitting to conclude with our Bohemian’s own words about The Book’s supposed author, who also wrote The Perfect Guide to the Sciences of the Quran. When referring to English and French 19th century religious leaders, he says:

“Such men as these may be allowed to in to inveigh in general terms and covert manner against sexual sin, providing they offend nobody in particular, while tickling every one’s ears with rhetorical embellishments. Society must not be shocked. Now, in the East people are more honest and outspoken on these matters. No false shame prevails, and consequently, far less uncleanness. No “SOCIETY FOR THE PREVENTION OF VICE” exists.”