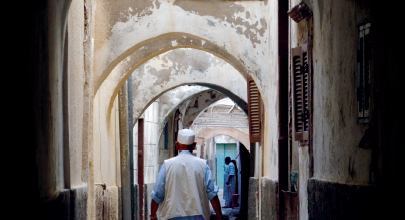 In 2004, former US diplomat Ethan Chorin made it his mission to introduce Libyan literature to an English-speaking audience.  Intrigued by the apparent absence of ‘place’ in modern Libyan short fiction, he decided to track down and translate stories that specifically mentioned cities and landmarks in Libya. This was not a mean feat, as Chorin soon discovered how intimately ‘place’ and ‘politics’ were connected.  As he translated the 16 stories from Arabic (in three cases jointly with Basem Tulti), he resolved to visit as many of them as possible, and to describe what he encountered there. The result is a mixture of travelogue and memoir that sheds light on the social factors that fed the 2011 Revolution, and its aftermath.

Translating Libya was first published in 2008 by Saqi Books and the London Middle East Institute at SOAS. Since then, Chorin has witnessed Libya’s turmoil firsthand, and has written extensively on the country’s political and economic landscapes, including his 2012 release, Exit the Colonel: the Hidden History of the Libyan Revolution. which was informed by Chorin’s experiences in Libya before and during the revolution.  The Second Edition of Translating Libya, published by Darf, includes a new introduction describing the Revolution’s literary repercussions, and Chorin’s translation of The Olive Tree, by Azza Maghur, the only story set during the Revolution.  Maghur is the eldest daughter of Kamel Maghur, two of whose stories are contained in the book.

Acclaimed Libyan writer Ahmed Ibrahim Fagih, whose short story The Locusts launched the book, acknowledges the cultural importance of Translating Libya in the Foreword: ‘There are not many Westerners who can claim to have stood with Libya at both sides of the line dividing “Qadhafi’s Libya” and “Post Qadhafi Libya”, or been in a position to draw a connection between the two. There are even fewer who have paid much attention to the impact of these events on Libyan culture, or vice versa. This is one of the attributes of Translating Libya.’

Chorin saw literature as an explorative tool not only for himself, but for the outside world, shut off from Libya for more than a decade.  Over close to two years, on weekends and off hours, Chorin sat in cafes and tea-houses, and scouring bookstores, news points and private collections across Libya for interesting literary samples linked to Libya’s three regions: Cyrenaica (East), Fezzan (south) and Tripolitania (West).  Collectively, the stories span more than 80 years of Libyan history.

In a nod to Benghazi, Libya’s literary and cultural capital, Chorin begins his literary odyssey in the East. The stories then take him to Bauhareshma, Derna, Jalo, Ghadames, Mizda, Soluq, Leptis Magna, Zintan, and Zwara. Around the stories he weaves travelogue, explaining to the reader how he found the story, what it took to get to the place, and the landmarks mentioned within the story – all of which provide an entertaining backdrop to his study of Libyan fiction.

The last section of the book is made up of short essays, including one on the history of the Libyan short story, another on the role of women and minorities in Libyan literature, and on Libyans’ simultaneous tendency to humor and depression. Chorin also includes two dispatches he wrote on trips to Benghazi during the 2011 Revolution, ‘Benghazi Blues’, and ‘the Graffiti of Benghazi’.

Translating Libya is much more than a collection of short stories. It is an adventure through a literary landscape, exploring the relationship between politics and culture in a country scathed by tumultuous events. This Second Edition recontextualises Chorin’s initial mission while Libya undergoes radical transformation.