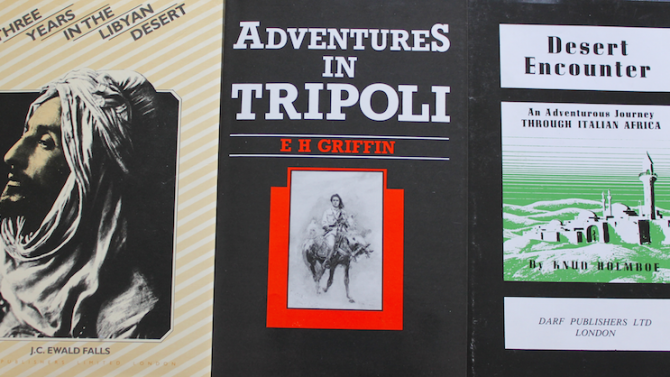 Forgotten Tales From Libya – Part I

Since 2011, swarms of writers have been eager to publish pieces on Libya. From academics trying to reach sensible political solutions, to fictionalised stories from life under Gaddafi’s 42-year regime. Before the 1969 coup d’etat, Arabists, orientalists, archaeologists and explorers were captivated by Libya’s history, nature and diverse culture spanning over its three regions: Cyrenaica, Fezzan and Tripolitania.

War and colonialism dominated the country in the first half of the twentieth century. In the first part of Forgotten Tales From Libya, we present a Danish journalist’s story, a German archaeological team’s search for Christian ruins in Cyrenaica, and a British humanitarian worker’s experience during the Italo-Turkish War in 1911-12.

Beginning his journey in Morocco and heading eastward, Knud Holmboe, a young Danish writer and Islamic convert, was driven to North Africa by his bohemian sense of adventure and discovery. He bravely set out to uncover the persecution that Arabs were facing at the hands of Italian Fascism, causing Italy to ban Desert Encounters from its shelves. The whole journey from Ceuta to Derna was undertaken in a car whilst he was garbed as an Arab, which facilitated access to places prohibited to non-Muslims.

The trip was not without controversy. En route to Derna, Holmboe was captured by Bedouins who mistook him for an Italian. He was later released after demonstrating his Islamic devotion by reciting Quranic verses. Sadly, in 1931 the travelling man’s when he was murdered Aqaba (modern day Jordan). The exact circumstances have never been uncovered, although some believe Italian Fascist intelligence were behind his killing. Desert Encounters is a fine reminder of the author’s selfless protest against fascist oppression in North Africa.

“The mysterious land into the interior of which we desired to penetrate is situated in the eastern portion of North Africa, between the Mediterranean, the Sahara, and Egypt, and has been less explored than the darkest districts of Central Africa and the Great Desert.”

J.C. Ewald Falls was part of an expedition led by German archaeologist Monsignor Kaufmann. The group aimed to explore some of North Africa’s major Christian sites, including a site dedicated to the fourth century Christian martyr, St. Menas, situated near Egypt’s Lake Mariout. Beyond the archaeological discoveries made, Falls writes sentimentally about his experience in a country so foreign to his own. The many encounters with local communities makes Three Years in the Libyan Desert a fascinating anthropological study of life among the ‘desert dwellers’.

“If it appears that I have taken, rather quixotically, a view entirely favourable to the Arab and the Turk, I will ask my readers to remember how naturally one sympathizes with a small nation in conflict with a more powerful one, and how spontaneously one sides with the team for which one may be paying, even if it be only for the afternoon.”

Twelve years prior to the book’s publication, E.H. Griffin, a member of the British Red Crescent Society, left London’s Charing Cross with twenty large cases of medical supplies. His final destination was Tripoli, where he and others aided wounded Turks and Arabs who were fighting against the Italian army. The humanitarian workers struggled to cope with a new dawn of devastation: airplane warfare. Griffin ensured his trip was not one full of gloom and trauma, as many accompanying photographs suggest, but rather one of appreciation for Libya’s landscapes, culture and people.

The Confines of the Shadows by Alessandro Spina (2015)

Originally published in Italian, this collection of novels and short stories follows Benghazi’s transformation from Ottoman rule, through Italian colonisation, and up to King Idris’s kingdom in the 1960s.
Read More