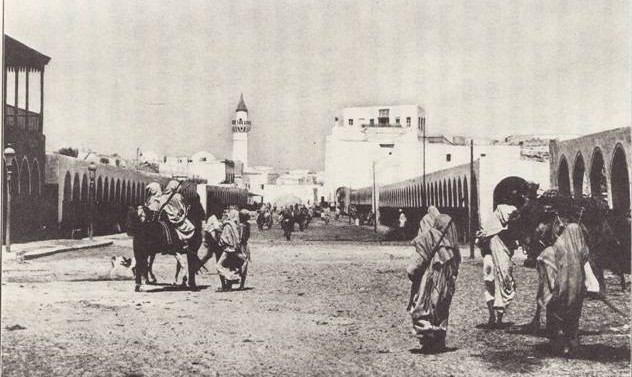 Part one of Forgotten Tales From Libya looked at three 20th century pre World Wa II books that told stories of archaeological discoveries, colonialism, war and travel. Part II provides more of the same with a little something different, starting with a snippet from a previous post on a Jewish scholar’s study of his faith in Libya. Then we have more epic orientalist travel tales, a stargazer’s story from the rooftops of Tripoli, and of course, one scholar’s questioning as to whether Muammar Gaddafi was, in fact, a feminist. Some titles are forgotten for a reason…

The Book of Mordechai: A Study of the Jews of Libya by Mordechai Hakohen (Darf Publishers Ltd 1980)

MORDECHAI Hakohen (1856 – 1929) was born in Tripoli to a Jewish family of Italian descent and later studied law to qualify him at Rabbinical courts in both Cyrenaica and Tripolitania. He composed the book in the early years of the twentieth century, but the first Hebrew edition was not published until 1978. Jewish people had a lower social rank than Muslims, often referred to as dhimmi status (protected non-Muslim people in an Islamic state). Although Hakohen expresses concern over religious inequality, his observations of culture and ethnicity are objective, allowing him to draw valid parallels between differing groups who once lived side by side. The book also functions as an evolutionary linguistic analysis of North African Hebrew and Arabic, detailing the reciprocal respect between the two languages. Although it was almost 50 years later when the text reappeared, The Book of Mordechai is now established as an accurate documentation of Jewish culture in Libya.

The Gateway to the Sahara by Charles Wellington Furlong (1909; Darf Publishers Ltd 1985)

Just years before the Italo-Turkish War hit Mediterranean waters, Charles Wellington Furlong visited the ‘most native of the Barbary capitals’ – Tripoli, ‘the white-burnoosed city, lies in an oasis on the edge of the desert, dipping her feet in the swash and ripple of the sea.’ The author’s colourful expedition into the Sahara opened the door to many more expeditions around the world, however, many consider his North African venture to be his most exuberant, contrasting the beauty of Tripoli and the Sahara with the many hardships faced in between.

Women at Arms – Is Ghadafi a Feminist? by Maria Graeff-Wassink (Darf Publishers Ltd 1994)

During the years 1969-2011, very little from inside Libya was reaching the outside world, and whatever did make it that far was often tinged with maniacal propaganda. Maria Gaeff-Wassink points out that many expats in Libya were unable to freely mix with locals, which altered perceptions on the country around them. Women at Arms is an all-out sociological study based at the Women’s Military Academy to get up close and personal with the Rahibat. Some pictures included bear an uncanny resemblance to socialist realism, and are there to support the Gaeff-Wassink’s preconceived argument, in which she concludes: ‘Ghadafi and Libyan women…go forward together on the difficult paths of modernity. Are they, as they believe, opening up a new way not only for Libya but for the whole of humanity?’
Suggestion: read alongside Annick Cojean’s Gaddafi’s Harem (2013)

At the time of writing, Mabel Loomis Todd claims there were only 12 English native speakers who permanently lived in the city. She lived in Libya twice to observe eclipses from  the British Consulate, taking us on an extraordinary journey into the history of music, art, food, life and politics within the walls and beyond the rooftops of Tripoli. The 1900 & 1905 eclipses are landmarks in her Oriental experience. Under the twenty seconds of darkness, religion, culture and ethnicity disappeared along with the sun as the sound of applause erupted across Tripoli.

Todd explains the difficulties of organising astronomy equipment in a world where Muslims don’t work on Friday, the Jewish Sabbath is on Saturday, and Westerners are not keen on breaking Sunday as a day of rest. Fascinating descriptions of differing Arab religious wedding ceremonies are also allocated chapters, explaining intricacies, similarities and differences. Perhaps the most astonishing thing is the harmony that existed between different cultures and religions. This isn’t to say 1900s Tripoli was a utopia , but a comparison with itself today raises all sorts of awareness. The image of Phoenician Monks, Rabbis, Imams, Nuns and Priests strolling the same streets can teach us all something about acceptance and tolerance.

Children of Allah is perhaps one of the best socio-political accounts of Libya under the reign of King Idris. They were lucky enough to travel to almost all corners of Libya’s vastness. Agnes distinguishes the tribal, political, geographical, historical and cultural differences between Fezzan, Tripolitania and Cyrenaica, with beautiful hand drawn illustrations accompanying the text. A saddening aspect of her eight-year account is what shortly followed the story. As she brings the book to a close in 1963, Tripoli is becoming more cosmopolitan, and oil exploration has provided the possibility of an equal distribution of wealth. This is not to say the country was without problems. Agnes gives a detailed account of the student riots that took place in 1963, resulting in a number of deaths. It is also worth noting that many of the problems that existed 50 years ago – such as the unification of the three Libyan provinces and women’s rights – still prevail today.