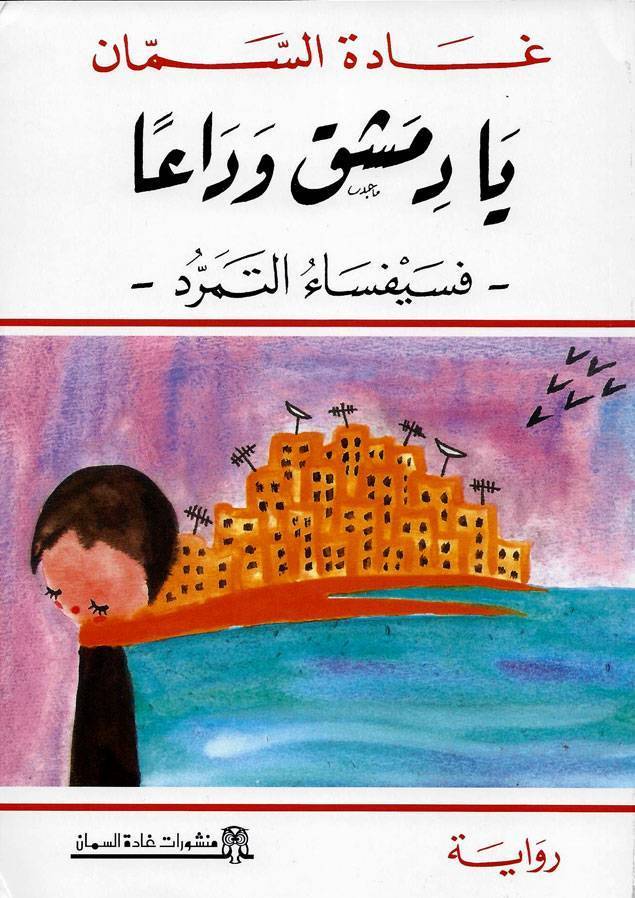 Since releasing her first collection of short stories in 1962, Ghada Samman has matured into an established figure of outspokenness, liberty, innovation and literary experimentation in the Arab world. She has come under scrutiny by critics for these very reasons; for example, in the 1990s she published a series of love letters Palestinian writer Ghassan Kanafani wrote to her during the 60s. Although many saw the poetic, sentimental side of Kanafani’s letters, others disapproved of Samman exposing this powerful Palestinian icon as a mawkish lover. To avoid harsh editorials and censorship, Samman opened her own publishing house in 1977, allowing her oeuvre to swell, and continue promoting female empowerment through Arabic poetry, novels, journalism and short stories.

Her forthcoming autumn 2017 translation by Nancy Roberts, A Farewell to Damascus, is set in the Syrian capital during the early 1960’s, a city that now languishes in the grip of corruption and political oppression following the Baathist takeover in Syria. The story opens as Zayn al-Khayyal, a university student and aspiring young writer, plots an early-morning escape from her house as her husband slumbers. Her mission: to get an illicit abortion, plans for which she’s divulged to no one, and to announce that she wants out of her stifling marriage. A rebel and a trail-blazer par excellence, Zayn draws down the wrath of the elite and the authorities, political and religious alike, as she challenges attitudes, and a ruling regime that sucks the life out of both oppressed and oppressor. As the plot unfolds, Zayn finds her way as a student to a neighbouring country which, though it grants her the freedom, respect and appreciation she had lacked in her homeland, becomes a place of anguished exile.

Armed with her accustomed humour, pathos and knack for suspense, Samman fearlessly tackles issues that roil societies across the globe to this day: the stigma that is attached to the divorced woman but not the divorced man; whether to choose a life partner for love, or for social status, prestige and material security; whether abortion is a crime or a means of forestalling needless undeserved suffering; lesbian intimacy as a declaration of freedom from male abuse and tyranny; rape as an instrument of humiliation and subjugation and unconditional acceptance as healing balm. A Farewell to Damascus is both a paean to a beloved homeland, and an ode to human dignity.

Nancy Roberts’ translation brings Samman’s work to Anglophone audiences for the first time since 2005. Despite publishing more than 30 volumes of stories, verse, essays and novels over the years, only Samman’s trilogy consisting of Beirut ’75 (1995), for which Roberts won the Arkansas Arabic Translation Award, Beirut Nightmares (1997), and Night of the First Billion (2005), along with The Square Moon: Supernatural Tales (1998) translated by Isaa Boullata, have been published in English.

Roberts received a commendation from the judges of the 2008 Banipal Prize for her translation of Salwa Bakr’s The Man from Bashmour (2007). Other literary translations include Naguib Mahfouz’s The Mirage (2008) and Love in the Rain (2008), and Ibrahim Nasrallah’s Time of White Horses (2012), whose Arabic original was shortlisted for the 2009 International Prize for Arabic Fiction. More recent translations include Codename: Butterfly by Palestinian novelist Ahlam Bsharat (2015), Kilimanjaro Spirits by Ibrahim Nasrallah (2015), The Dust of Promises (2014) and Chaos of the Senses by Ahlem Mostaghanemi (2014), and Lanterns of the King of Galilee by Ibrahim Nasrallah (2014).