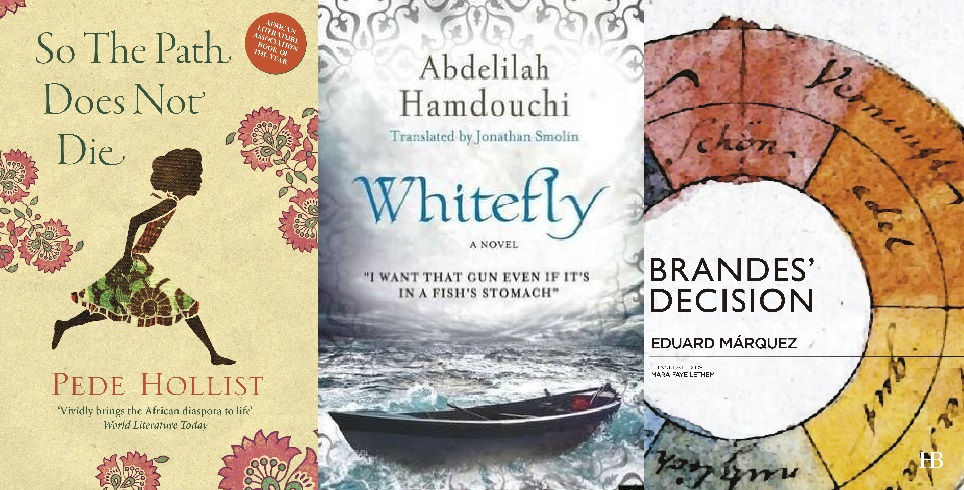 New Titles from Around the World

Meet three publishers who’ll help you diversify your bookshelf. Hoopoe, Jacaranda and Hispabooks are publishing fiction from across the globe, and with summer (apparently) here, let’s see what new releases they have in store…

We are seeking out fresh writing from Marrakesh to Baghdad and Khartoum to Aleppo, for adventurous readers everywhere. From historical epics, social satire, police procedurals and stories of the future Middle East: we will publish the exciting and the unexpected.

Through elegant paperback and digital editions, we’re championing bold, contemporary writing and the finest, groundbreaking authors of today.
hoopoefiction.com is a place of discovery for our growing community around the world, where we’ll share inspiring writing from the Middle East and where readers can explore interviews with our authors and commentaries from our translators and editors.

Hoopoe, an imprint of AUC Press, launched in Spring 2016.

A fast-paced crime thriller from the Arab west. When a fourth corpse in three days washes up in Tangier with a bullet in the chest, Detective Laafrit knows this isn’t just another illegal immigrant who didn’t make it to the Spanish coast.

The traffickers. The drug dealers. The smugglers. They know what it takes to get a gun into Morocco, and so does Laafrit. As his team hunts for the gun, Laafrit follows a hunch and reveals an international conspiracy to unlock the case.

“Much is packed into this relatively short, fast-paced novel.”—Sally Bland, The Jordan Times

“The plotting is tight and watching the story’s resolution unfold is a delight. . . . As a guilty-pleasure read, it is a winner.”—M. Lynx Qualey, The National

“Abdelilah Hamdouchi seems to have found the formula for the emergence of the Moroccan detective novel.”—Libération Kaleidoscope

Jacaranda Books Art Music Ltd is a fresh and exciting new independent publishing house based in London. We publish adult fiction and non-fiction, including illustrated books, across linguistic, racial, gender and cultural boundaries – books in many ways as cosmopolitan as our city.

Through our publishing, we directly address the ongoing lack of diversity in the industry today, and seek to enrich the landscape from boardroom to bookshelf.

We aim to bring authors and books that represent the cultural, heritage and ethnic variety that can be found in London, with a particular interest in works related to Africa, the Caribbean, and African America.

At the heart of our publishing strategy is a love of outstanding, thought-provoking work. We believe that a wealth of unheard, under-represented voices exist globally and it is our mission to create the space for those voices to be seen and heard by new readers.

So The Path Does Not Die by Pede Hollist

Long after Fina has left Sierra Leone for America, memories of a broken initiation still haunt her. She longs to return home, to find her grandmother and follow the path that had been set for young girls centuries past.rmoil and feelings of ‘otherness’ persist as she travels further from the streets of Freetown to Washington, D.C., and echo with the tensions, ambiguities, and fragmentation of the diaspora. Ultimately, the broken path of her childhood takes Fina back to Sierra Leone, to a life she had never imagined for herself.

So the Path Does Not Die is a tender, gently observed and beautifully rendered novel that addresses issues of identity, ethnicity, gender and female circumcision told through the life of a feisty, intelligent and determined young African woman.

‘A cleverly written, superb and charming… work, garnished with delectable prose. So the Path Does Not Die illuminates the diaspora experience.’ Afrikult.com

Hispabooks is a Madrid-based publishing house specializing in contemporary Spanish fiction in English-language translation. The list of titles includes rising talents and newcomers alongside established authors, many of them winners of the most prestigious Spanish literary awards and translated into many languages, and now for the first time into English. At Hispabooks we pride ourselves on our expertise on the Spanish publishing market, a hallmark which enables us to pick first-hand those works of literary fiction which really make a difference and might resonate with an international readership. In brief, it’s all about good books and making them available for the first time to the English-speaking audience.

Brandes, a painter living in Nazi-occupied Paris has a tough decision to make: Göring has taken away all his artwork and asked him to hand over his Lucas Cranach painting, a family heirloom. If he relinquishes the Cranach, he will recover all his pictures in exchange. If he refuses, he will never get them back. In his search for a solution, Brandes reflects on the deeper meaning of things and their true values.