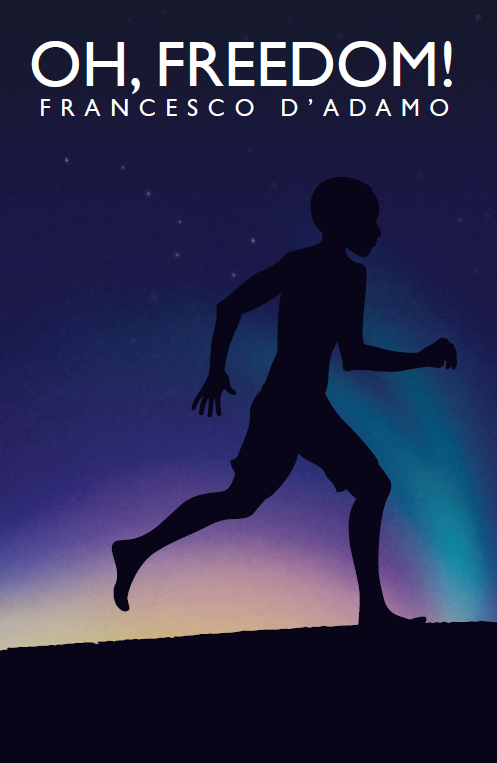 Oh, Freedom! A Novella That Highlights The Beauty of Humanity

Peg Leg Joe’s arrival in an Alabama cotton plantation is followed by a storm, an omen of what is to come. Peg Leg is a hero. He has freed himself from slavery and has now become a “guide” for others to follow his path. This character is at the centre of award winning author Francesco D’Adamo’s novella “Oh, Freedom!”, now available in English thanks to Sian Williams’ translation from Italian and published by Darf Publishers.

This novella was inspired by the historical “Underground Railroad.” The Underground Railroad was not an actual railroad, but rather a clandestine route that took many slaves from across America to their new life of freedom and equality in states where slavery had been abolished.

The escape plan is clear, although not simple: the runaways have to travel at night and remember Peg Leg Joe’s songs. Little Tommy’s family embarks on this long and tiring  journey, where they will have to march along river banks, high grass, and private lands, exposed to all kinds of weather, their compasses pointing towards the Northern Star.  Canada, or in code Canaan, is their destination.

But the journey proves riskier than they thought. Jim Kniff, the master’s overseer, does not swallow the bitter pill: how could he be fooled “by a bunch of Negroes”! These slaves had never been out of the cotton fields before and now, not only they have escaped, but they have left no trace. Jim Kniff and his dogs will be on their case all the way to the end of the family’s odyssey.

In this journey, a very beautiful relationship develops between Peg Leg Joe and Little Tommy. From the ten year old boy’s perspective, it is more than friendship, it is more than admiration. It’s probably best described as awe. Tommy doesn’t just want to become like Peg Leg Joe, he goes so far as to wishing his father was more like their guide. And although Peg Leg Joe scolds Tommy harshly for voicing these thoughts, the boy has already clear in his mind what he is going to do as a grown man. That is, if he survives the journey.

To highlight the beauty of humanity, the story talks about the “grapevine network”. Peg Leg Joe and other guides have set up a number of shelters and hideouts, sometimes they are empty tree trunks, sometimes barns or people’s houses where the runaways can disappear for a while, find food, new clothes or footwear, and some rest.

Also worth noticing is the fact that Peg Leg Joe is almost a revelation to this family. From him they learn the concept of equality amongst men of different colours, an idea that this little family of church-goers has never learnt in the cotton plantation. And so, throughout their journey, Peg Leg tells them stories of other people who also freed themselves and are now happy elsewhere. Peg Leg gives them hope, and instils in them a sense of pride. Peg Leg also teaches Tommy to look at the stars and recognize the “drinking gourd”, which would give them direction.

Songs play a special role in this novella. As the slaves are unable to read and write, they rely on oral memory. Peg Leg Joe’s songs, which Tommy learns by heart, sound like religious chants, but in fact, serve different purposes. Sometimes they contain hidden directions. Sometimes they are meant to keep the travellers’ spirits high. Some other time they teach them the concept of freedom.  The same title of this novella, “Oh, Freedom!” takes after a freedom song often associated with the 1960’s American Civil Rights Movement. There are other songs included in the narration, which the author makes a point of listing at the end of the book, almost as to say that this story comes with its own soundtrack.

The novella has been thought for a young readership. Francesco D’Adamo has been a secondary school teacher for years before becoming a full time writer. But the descriptions he makes of the landscapes, the characters’ state of mind, the suspense, a constant in the plot, are rendered so vividly that an adult audience will not fail to appreciate the literary value of this book.