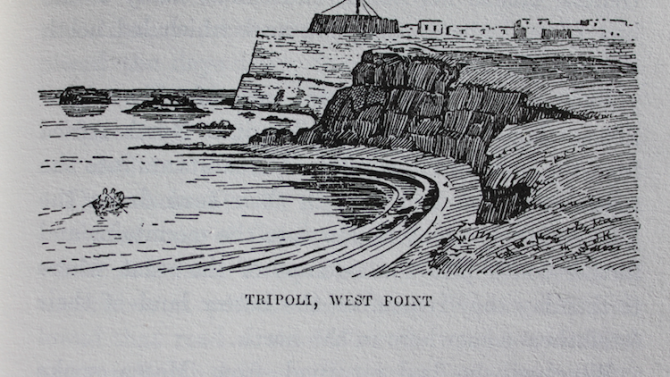 Across the Sahara (1910) – from Tripoli to Bornu on Camelback

The desert has left an impression on my soul which nothing will ever efface. I had entered it frivolously, like a fool who rushes in where angels and, I believe, even devils fear to tread. I left it as one stunned, crushed by the deadly majesty I had seen too closely. I imagine that such must be the feelings of the shipwrecked mariner whom the stormy seas have torn from his wreck and thrown, half drowned, upon the shore…

In 1876, Hanns Vischer was born in Switzerland. Following his education in England, he became a British citizen and undertook the position of political officer in Africa. In 1910, he first published Across The Sahara, logging his journey from Libya’s Tripoli to Lake Chad in what is now known as northeastern Nigeria. Vischer said the purpose of his journey was to “better understand those people among whom my life-work lay.” Written by Sir H.H. Johnston, the book’s Preface labels the journey as one of incredible calibre, praising Vischer for his bravery and perseverance while fronting “a motley caravan of Negroes and Negroids”. In 2001, explorer John Hare followed the same caravan road in reverse. He wrote Shadows of the Sahara (2002) to document his 1500-mile journey.

Colonialists were inherently racist and suffered from a superiority complex, which was necessary to overcome ethical boundaries. I perceive Vischer’s racism as ignorant rather than derogatory. A hundred years ago, many Europeans believed they were the pinnacle of civilisation. Here is Vischer at his best (worst) –

“…the Australoid is not a Negro, but belongs to a still more primitive and generalized type of humanity.”

“At such moments it is neither training nor education which comes to the aid of the European, but just the instinctive sense of his moral superiority.”

Evidently, this was the mindset of many Europeans who entered or studied the Orient. When confronted with Saharan tribes, how could they relate to their mystical beliefs over Western logic? Vischer is startled by the Saharans supernatural behaviour. Hauwa was part of his caravan. She was a mighty Bagirmi woman who “stood nearly six feet high and had the chest and shoulders of a prize-fighter. Her tongue rarely stood still…Her authority was based on supernatural endowments of no mean order: she was a prophetess, and suddenly in camp “the spirit” would seize her and manifest itself with unearthly noises. Falling down or jumping high into the air, she uttered weird cries, now like the braying of a donkey, now like the howls of a hyena. She foamed at the mouth, and gradually getting more and more violent, she, at last, worked herself into a state of frenzy, which demanded the immediate interference of her husband and three or four powerful friends.”

Spirit possession is untranslatable to a rational European. When Vischer is confronted by Hauwa’s demonic state of mind he clutches onto his Winchester rifle whilst locals chant, “Allah Akbar”.

Despite feeling alienated for the most part, Vischer embraces and graciously writes about many Saharan traditions. This includes the ceremonious occurrence of drinking tea, to which he even wrote a poem about. He also gained an adequate understanding of camels and was extremely fond of the animal’s intelligence, endurance and loyalty. In one instance he intricately describes why the Tuareg and Tubu choice of a southern-bred camel is better than its short-legged north-coast cousin.

Vischer documents a long, vigorous journey through the Sahara, and is full of admiration for those who can survive in 50c+ conditions. He writes about the array of cultures that inhabit the land between Tripoli and Lake Chad, using colourful anecdotes to entertain the reader. He also describes the many successful and unfortunate expeditions of the Sahara, including Miss Alexandrine Timme who was murdered by Tuareg tribesman in 1869.

Across the Sahara includes numerous hand-drawn illustrations, photographs and maps to bring Vischer’s journey to life, furthering the success of his vivid written word. It also stands as an important historical document for its time as many travellers and explorers were deterred by the relentlessness of the Sahara.

The book is available to purchase from our site for the discounted price of £20 and for a limited period only!