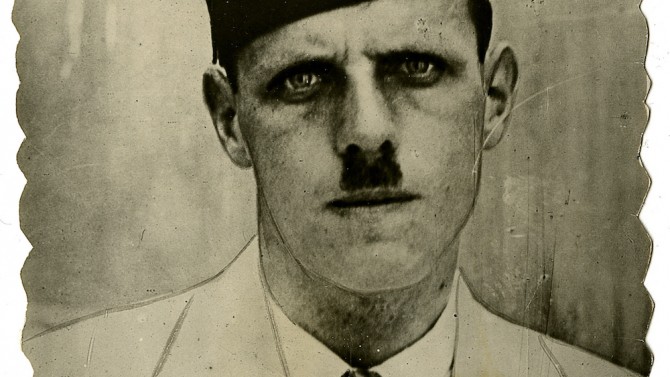 Knud Holmboe was a young Dane who embraced Islam and spoke fluent Arabic. In 1930 he conceived the idea of driving a car through North Africa from Morocco to Egypt garbed as an Arab and studying Arabic culture as he journeyed. With an American acquaintance and an Arab boy aged twelve he made his way from Ceuta through the southern part of Algeria and Tunis, successfully passing high mountains, burning desert, and treacherous salt lakes.

As soon as he entered the Italian colony of Tripoli he was regarded with suspicion, but eventually permission was granted for him to proceed. In the uninhabited coastal region south-east of Syrtis the car broke down and the party became hopelessly lost. For ten days they wandered about in the Libyan Desert suffering terrible agonies from thirst and hunger, until Holmboe staggered into an Italian fort. Later, when he crossed into Cyrenaica he experienced the full shock of Italy’s imperialism.

General Graziani was Governor of the colony. To him the Arabs were ‘dogs’ and ‘animals’; executions of rebels took place at the rate of thirty a day; vast concentration camps were guarded by native troops from Eritrea, and thousands of Bedouins were here corralled without prospect of release; the death penalty was enforced against all Arabs convicted of communicating with or providing food for the roving bands who, under the leadership of Omar Mukhtar, were still maintaining a guerrilla warfare in the mountains; and the Senussi sect of Muslims was suppressed.

Holmboe was brought before Graziani, who tried to dissuade him from continuing his journey, but eventually allowed him to start from Derna in an escorted convoy. On the way his car broke down, and he was captured by Bedouins, who spared his life on finding that he was not an Italian and that he could recite from the Koran.

The Italians now accused him of being a spy and when he reached Derna he was arrested and deported to Benghazi in a small steamer. The horrors endured by him and twelve Arab fellow-prisoners (including a white-bearded old man and a young boy) during the two day voyage in a rough sea were unspeakable; packed into a filthy room they were chained up in separate iron cages, with hands manacled.

From Benghazi Holmboe sailed to Egypt. He had failed to complete his pioneer journey, but he had collected information of much more practical value to the outside world. His book shows that he started with no animosity against the Italians – indeed, he emphasises the kindness he received from individual Italian officers – but his own eyes and his talks with Arab leaders convinced him that the domination of Italy meant the extinction of Arab freedom in North Africa.

First published as Ørkenen Brænder (1931) in Copenhagen, Denmark, Desert Encounters foreshadowed the methods of colonisation and subjugation which Italy exercised during their invasion of Abyssinia.

The book was banned in Italy due to the nature of its context, but was very successful in Denmark and Sweden upon release. Knud Holmboe unfortunately never witnessed his masterpiece’s success, for in 1931 he was killed in Aqaba, now part of modern Jordan, whilst on his hajj to the holy city of Mecca. At the time it was speculated that Arabs killed him, but some suspected that the Italian secret service were behind his death after publishing Desert Encounters.

The 1989 facsimile version of the book is available from our website for £12.