Knud Holmboe was a young Dane who embraced Islam and spoke fluent Arabic. In 1930 he conceived the idea of driving a car through North Africa from Morocco to Egypt garbed as an Arab and studying Arab culture as he journeyed.

As soon as he entered the Italian colony of Tripoli he was regarded with suspicion, but eventually permission was granted for him to proceed. In the uninhabited coastal region southeast of Syrtis the car broke down and the party became hopelessly lost. For ten days they wandered abou the Libyan Desert suffering terrible agonies from thirst and hunger, until Holmboe staggered into an Italian fort.

The book, which contains many photogaphs of great documenary interest. When first published, the book became widely acclaimed in Denmark and Sweden. It was banned in Italy. The author unfortunately did not live to see its success, for in 1931 he was killed by Arabs in Arabia. 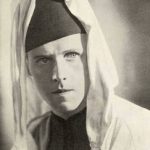 Knud Valdemar Gylding Holmboe (April 22, 1902 Horsens Denmark – October 13, 1931 Aqaba, Jordan) was a Danish journalist, author and explorer who converted from Protestantism to Catholicism in 1921, and, after a sojourn in North Africa, ultimately converted to Islam in 1929.[1] Six years later, he published a book of his experiences on a […]

Translated from Danish by H. Holbek