×
View basket “North Africa and the Desert” has been added to your basket.

Pilgrimage to Al-Madinah and Meccah Vol. I

Sir Richard Francis Burton (1821-90) is the most celebrated of Victorian scholar-explorers, not least known for his part in the perilous expedition under J H Speke, which led to the discovery of Lake Tanganyika.

It was, however, an earlier journey that established his reputation as an adventurer and writer of courage and sensitivity when, disguised as a ‘Darwaysh’ (a wandering vagrant or merchant), he set out on a pilgrimage to Mecca. For a non-Muslim to be discovered under such circumstances meant certain death; but despite many alarms, Burton successfully completed his journey, thus being the first modern European to bring back a detailed record of his findings. Since the seventeenth century, only Burckardt had similarly succeeded in extending our knowledge of that “huge white blot which on our maps still notes the eastern and central regions of Arabia.”

A Pilgrimage to Al-Madinah and Meccah remains a classic study of Arabia, her people and customs, at the end of the 18th century. These two volumes, here reproduced in facsimile from the Memorial Editions of 1893, contain all the plans, maps and illustrations of the original text. 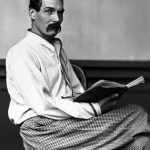 Sir Richard Francis Burton KCMG FRGS (19 March 1821 – 20 October 1890) was a British explorer, geographer, translator, writer, soldier, orientalist, cartographer, ethnologist, spy, linguist, poet, fencer, and diplomat. He was famed for his travels and explorations in Asia, Africa and the Americas, as well as his extraordinary knowledge of languages and cultures. According […]