Johann Ludwig Burckhardt (1784-1817), the great Swiss Orientalist, devoted his regrettably short life to travels and explorations in Africa and the near east, under the aegis of the African association. Under the name of Shaikh Ibrahim Ibn Abdullah and wearing local dress, he gained a profound knowledge of Islamic Law and Customs, and a mastery of both contemporary and classical Arabic of the Qur’an seldom equalled by a European. Burckhardt arrived in Cairo from Syria in 1812. Later he travelled up the Nile and thence eastward through Shendi and Suakin to make the pilgrimage to Mecca and Medina, returning across the Red Sea to Suez in 1815. He visited Mt Sinai the next year, but while waiting in Cairo, planning an epic journey across the Sahara, he contracted dysentery and died. He had a deep empathy for Islam and was buried as a holy pilgrim in the Muslim cemetery there.The African Society undertook the publishing of his Journals, and these valuable works are being meticulously republished in a facsimile edition by Darf publishers, so they are once more accessible to both scholars and travellers as well as the informed reader. 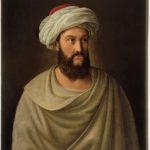