×
View basket “Nubia and Abyssinia” has been added to your basket.

When the Italians arrived at Tripoli in 1911, many foreign workers left behind a country and life they adored so much. The white streets of Libya’s capital echoed with Arabic, Hebrew, Modern Greek, Turkish, Maltese and French. It was a melting pot, attracting folk who had no particular correspondence to each other. Cultures lived side by side, but Libyan traditions remained prominent and were respected by all.

At the time of writing Tripoli the Mysterious, Mabel Loomis Todd claims there were only 12 English native speakers who permanently lived in the city. This was pre World War I, and the same year the Titanic left Southampton. As claimed in the book’s introduction, Tripoli provided endless possibilities for visitors and inhabitants alike. In a tone of disappointment, Todd writes: “In spite of months of residence there and constant eagerness for all its enchanting phases, I bring only an incomplete picture of the extraordinary region as I saw it, though drawn with a loving and appreciative hand.”

She lived in Libya twice to observe eclipses from the rooftops of the British Consulate. She takes us on an extraordinary journey into the history of music, art, food, life and politics within the walls of the city and beyond. The 1900 & 1905 eclipses are landmarks in her Oriental experience. Under these twenty seconds of darkness, religion, culture and ethnicity disappeared along with the sun. The sound of applause erupted across Tripoli. Being confronted with the greatness of our mechanical universe is always a humbling experience. It should allow us to see that we are all equal under the sun as well as in darkness. 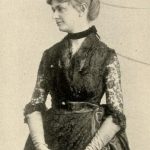 Mabel Loomis Todd or Mabel Loomis (November 10, 1856 – October 14, 1932) was an American editor and writer. She is remembered as the editor of posthumously published editions of Emily Dickinson and also wrote several novels and logs of her travel with her husband, astronomer David Peck Todd. Todd’s relationship to the Dickinson family […]