Half a century ago when Mochtar Lubis’ Twilight in Jakarta was secreted out of Indonesia and published in London, it was the first Indonesian novel ever to be published in English translation. The novel, a depiction of social and political events in the capital during the run-up to a national election, contains a grim cast of characters: corrupt politicians, impotent intellectuals, unprincipled journalists, manipulative Leftists, and impetuous Muslims to name but a few. Although the novel represents a condemnation of political practices prevalent in Indonesia in the 1950s, readers today will find much in this novel that still resonates. It is re-published in English by the Lontar Foundation in Jakarta at a time when, after three decades of authoritarianism and more than a decade of transition, Indonesia once again has a boisterous multi-party system of competing and collaborating political parties; as well as a mass media which often both serves particular political interests and thrives on sensationalist stories of corruption and malfeasance. This English language translation was done in 2013. 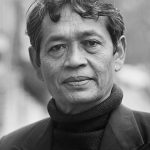 Mochtar Lubis (1922-2004) was an Indonesian journalist and novelist. His novel Senja di Jakarta (Twilight in Jakarta) was the first Indonesian novel to be translated into English. In 1949, Lubis cofounded Indonesia Raya, later serving as the daily’s chief editor. His work with Indonesia Raya led to him being imprisoned numerous times for his critical […]