The death of General Gordon at Khartum in 1885 at the hands of the Mahdi’s forces proved a massive blow to the British military establishment, and few could rest until his death was avenged. Amongst these was an ambitious, adroit officer Herbert Horation Kitchener.

In 1892, following several years distinguished service in Africa, Kitchener became a major-general in charge of the Egyptian army. His reorganisation and training of those forces over the next five years had one aim in view: the defeat of the Mahdi in the Sudan.

In 1897, the author of this work joined kitchener’s troops as a correspondent as they began their first moves towards the ‘pacification’ of the Sudan. He describes in detail the various military undertakings of the expedition, culminating in a vivid and chilling description of the Battle of Omdurman at which the Mahdi’s rule was finally ended. 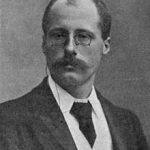 George Warrington “G. W.” Steevens (10 December 1869 – 15 January 1900) was a British journalist and writer. Steevens was born in Sydenham, and educated at the City of London School and Balliol College, Oxford. He was elected a fellow of Pembroke College, Oxford, in 1893 and also spent some time at Cambridge where he […]