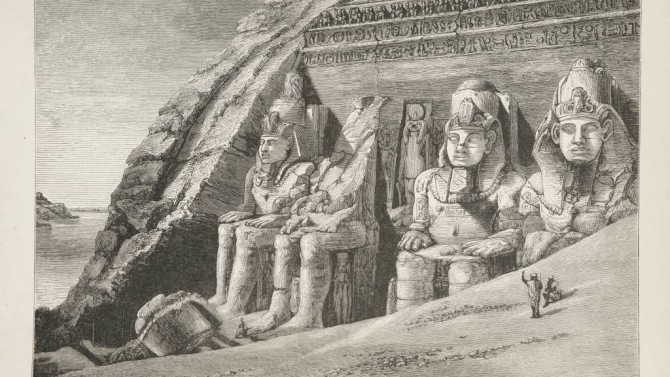 As a child, Ancient Egypt was always the most captivating of historical subjects. Adventure, mysticism, and the unknown all existed within its borders; a space that still bursts with cultural and natural wonders. Not many places on earth can awaken such curiosity in children and adults alike. One lady’s inquisitiveness allowed her to step into this riveting world and attempt to encapsulate Egypt’s otherness in A Thousand Miles Up the Nile (1877).

Egyptologist Miss Amelia Edwards devoted her time to researching the subject, but only when she wasn’t writing novels and poetry or lecturing around the globe. In 1889, the US newspaper The Boston Globe called her ‘the most learned woman in the world’. Seven years earlier she founded the Egypt Exploration Society (then Egypt Exploration Fund) with archaeologist and orientalist, Reginald Stuart Poole. Still in existence today, the Society produces an annual journal that is published in English, French and German.

In the winter of 1873-74, Miss Edwards and her expedition embarked on a journey that both started and finished in Cairo. A Thousand Miles records the trip with outstanding detail. Although the fundamental purpose of her voyage was researching Ancient Egypt, she also pieces together a thorough analysis, albeit orientalist, of Egyptian life in the late 1800s. The book begins at Cairo’s famous Shepheard’s Hotel* where Egyptologists and orientalists gather during the ‘Egypt Season’ (winter, basically) to boast new routes and discoveries. Her expedition includes an array of people including British landscape artist Andrew MacCallum. Together they sailed in a dahabeah (Nile passenger boat) for a distance calculated at just short of the full thousand miles.

“The sun is high, the heat is overwhelming, the felucca waits; and we turn reluctantly away, knowing that between here and Cairo we shall see no more curious relic of the far-off past than this dismantled stronghold. It is a mere mountain of unburnt brick; altogether unlovely; admirable only for the gigantic strength of its proportions; pathetic only in the abjectness of its ruin. Yet it brings the lost ages home to one’s imagination in a way that no Temple could ever bring them. It dispels for a moment the historic glamour of the sculptures, and compels us to remember those nameless and forgotten millions, of whom their rulers fashioned soldiers in time of war and builders in time of peace.”

As a privileged traveller, she leaves little unturned from Cairo to the expedition’s furthest south destination, Abu Simbel temples (and back again). Miss Edwards envisaged Egypt as a ‘Great Book’; one which is ‘not very easy reading, perhaps, under any circumstances; but at all events quite difficult enough already without the added puzzlement of being read backwards.’ She became the analyst of not only the text itself, but what was also written between the lines.

More than 70 illustrations drawn by Miss Edwards accommodate the story, which are gratuitous rather than a necessity. Originally, the images were painted in watercolours and were significantly larger. Miss Edwards hands all credit to Mr G. Pearson who transferred the illustrations to wood engravings. She admits that ‘some of these blocks may stand for examples of the farthest point to which the art of engraving upon wood has yet been carried.’

Her ability to entwine academic knowledge with an enticing way with words makes A Thousand Miles exceptionally easy to read despite its daunting thickness. It certainly holds the power to rekindle an interest in Ancient Egypt that my adulthood swallowed whole.

*The Shepheard’s Hotel is still in Cairo today. It was rebuilt in 1952 after it was set on fire during anti-British riots.

Miss Amelia Edwards’ A Thousand Miles Up the Nile is available in our online shop for £18.