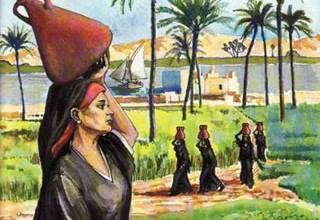 Zainab, a name which aptly reflects the beauty of this tale’s protagonist is also the title of the first modern Egyptian novel written in native vernacular. Crafted in 1910 by a privileged member of society and a student at the time living in Paris, Mohamed Hassein Heikal later rose through the ranks of Egyptian politics and media. The writer, journalist and politician also holds a number of written works to his name, including The House of Revelation (1939) and Thus was I Created (1955). Despite his social status he was not entirely disconnected from the rest of society, proved not only by the social policy he helped enforce throughout Egypt, but also through this immersive, highly critical and sensitive piece of work.

Heikal successfully humanises and contextualises Egypt’s societal issues without too reproachful a voice. As the great poet, Ahmed Fouad Negm said, ‘it is better to wake your child up through laugher, rather than shouting at him’. Heikal expresses his sympathies with the fellah of Egypt, who despite the apparent reverence with which they are looked upon by society are still obliged to bear extreme difficulties, which they do so with great dignity. Their suffering remains unchallenged as they are routinely exploited by their employers, the state, ‘religious leaders’ and cheated out of education which results in the demise of their mental and physical wellbeing. Illnesses may be treated as a metaphysical phenomenon, rather than with a trip to the doctor, whilst depression is treated as a headache.

In Zainab, we are concerned principally with the children of both the fellah and the landowners.  Zainab, a hardworking farmer girl, is to be married to a son of the landowner despite her love for another named Ibrahim. Heikal is highly critical of this traditional marriage practice, where young men and women are picked off by families and pushed together into marriage to suit the requirements of the parents over the needs of the young couple. This message is clear throughout the book, but appears most starkly in an open letter from Heikal to the public, guised as a note written by the character Hamid to his own father. Hamid states, “To this day I consider the institution of marriage defective, on account of the conditions that are attached to it. Indeed I believe a marriage which is not based on love and does not progress with love to be contemptible”

As Heikal wrote in his room in Paris he was undoubtedly influenced by his nostalgia, describing scenes in Egypt in a way that only an Egyptian could. Despite his sometimes overly exaggerated romanticism, Heikal is a man who has succeeded in writing for the woman. His critiques of society are logical and empathetic. Few are painted as evil in Zainab but the writer warns that as with most of society’s ills, our failures are the consequence of apathy, silence and the desire to fulfil what is expected of us through convention, culture and our own ignorance.

Noora Ismail is the founder and chief contributor of Thaqafa Magazine. Currently based in London, she studies MA Journalism.

The 1989 Darf Publishers edition of Zainab is available from our online bookstore for £9.95 in hardback.