The Apartment in Bab El-Louk

“The Apartment in Bab El-Louk is a graphic novel combining art and literature.
In just 84 pages, downtown Cairo comes to life in all its messy glory:
a succinct metaphor for post-revolutionary Egyptian society as a whole.”
BookBlast.com

“The Apartment in Bab El Louk is a collaborative tour-de-force.
This book gives English readers a taste of the exciting energy of Egypt′s burgeoning,
collaborative graphic-novel scene.”
Qantara

“Ganzeer elegantly laid out the text, the scattered rantings of an agoraphobic misanthrope,
more poetry than prose—alongside images of the gritty downtown flat.
You’re forced to listen to the anonymous narrator, screaming at unwanted visitors,
neighbours and maids who knock on the door of the cramped apartment.
Hitchcock might have conjured up such a neurotic character, a dark face peeping out the window at a quarrel on the street below.
“You’ll be scared, even though you’ve locked the door,” says the narrator, speaking with a brevity that portends doom.
The last eight pages of this “fabulous noir poem,” as it’s been called, feature a comic by Ahmed Nady.
He’s an insurgent graffiti artist and illustrator of grotesque political caricature,
the perfect guy to draw a shakedown at the hands of corrupt cops. In his comic, we learn that the reclusive narrator has been murdered.
The cops bust into the joint. But they pinch a patsy, an innocent neighbour, rather than the real culprit.”
The Paris Review

This ‘fabulous noir poem’ has been simply described as ‘the reflections of an old recluse in busy downtown Cairo neighbourhood of Bab El-Louk’ by Egyptian artist, Ganzeer. Cairo-based writer Donia Maher was first published in Arabic by Dar Merit in 2014 and then received the Kahil Award 2015 for the Graphic Novel Prize. 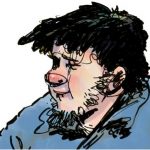 Ahmad Mohammad Nady (أحمد محمد نادي‎) is an Egyptian political cartoonist, comic artist and activist. Belonging to a family of artists, Nady began his career early on, steadily rising to become one of the best known comic artists in Egypt at a young age. He has drawn political cartoons since an early age, and since the Egyptian Revolution […] 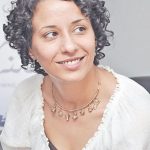 Donia Maher is an Egyptian artist and writer. She was born in Cairo where she studied acting at the High Institute of Theatrical Arts. After her graduation, she acted on stage in several plays, until her breakthrough came with her role in the independent film “Al Khorug lel Nahar” (Coming Forth by Day), which was highly regarded in Egypt […] 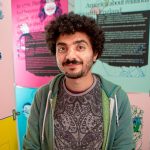 Ganzeer is the pseudonym used by an Egyptian artist who has gained mainstream fame in Egypt and internationally following the 2011 Egyptian Revolution. Prior to the revolution, Ganzeer’s popularity was widespread yet limited to the spheres of art and design. Ganzeer’s artwork has touched on the themes of civic responsibility and social justice and has been critical […]

Published by Darf in November 2017