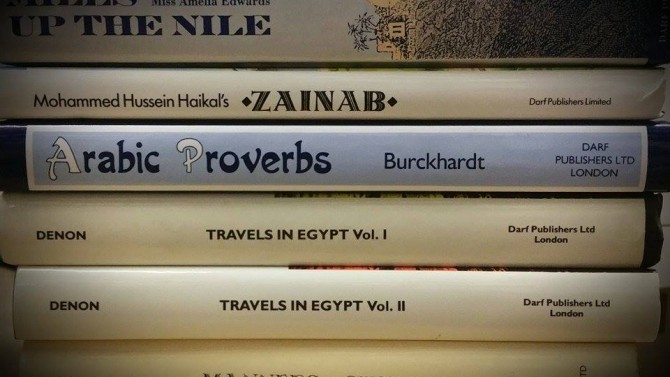 Egypt has intrigued historians and travellers for thousands of years. Written accounts date back to Graeco-Roman Period in the 3rd century BC and since then, countless books and studies have appeared on shelves around the world. Here are a few titles written by those with a passion for all things Egyptian!

Egyptologist Miss Amelia Edwards devoted her time to researching the subject, but only when she wasn’t writing novels and poetry or lecturing around the globe. In 1889, the US newspaper The Boston Globe called her ‘the most learned woman in the world’. Seven years earlier she founded the Egypt Exploration Society (then Egypt Exploration Fund) with archaeologist and orientalist, Reginald Stuart Poole. Still in existence today, the Society produces an annual journal that is published in English, French and German.

In the winter of 1873-74, Miss Edwards and her expedition embarked on a journey that both started and finished in Cairo. A Thousand Miles records the trip with outstanding detail. Although the fundamental purpose of her voyage was researching Ancient Egypt, she also weaves a thorough analysis of Egyptian life in the late 1800s.

Lane’s study covers a range of topics, from literature to from religion, law and literature, through to domestic matters, art and superstition. The title is often referred to in Edward Said’s Orientalism (1978) as an incontrovertible example of a Westerner’s perspective on Arab culture. The text is illustrated with admirable woodcuts drawn by the author, who spent a total of five years in the North African country. When the book was first published in 1836, it was received as ‘the most remarkable description of a people ever written.’ However, Lane was unfulfilled with his book’s lacking of female representation resulting from Egyptian gender segregation. A few years later, his sister Sophia Lane-Poole compiled The Englishwoman in Egypt: letters from Cairo to fill the void.

Nephew to Edward and son to Sophia, Stanley Lane-Poole (1854-1931) also shared a passion for Egypt. In 1883, he undertook an archaeological expedition to Egypt and then pieced together this beautiful collection of art, including architecture, mural sculpture and calligraphy, mosaic, wood and ivory carving, metalwork, glassware and pottery, which are all lavishly illustrated.

Originally published in French, Baron Dominique Vivant Denon (1747-1825), French illustrator and government official, accompanied Napoleon on his Egyptian campaign in 1798. His journal combines an extraordinary account of military endeavour, with a survey of the country and its people as seen through the eyes of a keen and sensitive observer. The resultant work, enhanced with numerous illustrations by the author, holds a unique place in both European and Arabic historical studies.

“A book more interesting in its subject, 0r more satisfactory in its execution, is seldom issued from the press. The country of which it treats, and the circumstances under which it was produced, equal each other in singularity.”
– Translator E.A. Kendal (1802)

Johann Ludwig Buckhardt (1784 – 1817) was a Swiss traveller who dedicated his life to his profession as an orientalist. He became fluent in Arabic in a number of dialects whilst adopting mannerisms to ensure he was accepted amongst locals. With a broad knowledge on the Quran, it is still unknown as to whether he officially converted to Islam before passing away.

Arabic Proverbs was published thirteen years after his death. The book is a collection of 782 Cairene proverbs that were originally compiled by Egyptian Sherif Addin Ibn Assad. Burckhardt believed the proverbs might ‘interest and gratify the Orientalist’, unknowning that almost 200 years on, Arabic Proverbs offers unorthodox insight to the Egyptian capital. Burckhardt offers the original Arabic proverb, the English translation and a concise explanation of each proverb’s context.

And whilst on the topic of Egypt, here’s a summary of one of our favourite novels soon to be available as an eBook!

Zainab (1913) was labelled as the ‘first Egyptian novel’ due to its consistent use of the local vernacular. Haikal wrote the novel in Paris whilst studying law at the young age of 22, but chose to publish it under the pseudonym Misri Fallah (Egyptian peasant). This was due Zainab‘s critique of oppressive elements of Egyptian culture, prominently arranged marriage. Within the pages we witness Zainab’s transition from a life of innocence and beauty to one of sufferance and anguish. Haikal’s first novel deserves admiration for its relevance to an issue that remains potent in many parts of the modern world.